Can I put sod down in the winter? 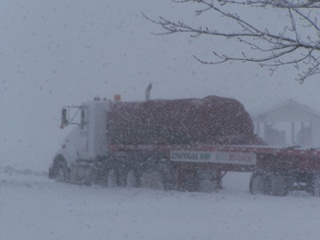 We frequently are asked if sod can be installed in winter.

The answer to this question depends on both the area of the country you are in, and the type of sod that you are installing.

Cool season turfgrass (Tall Fescue, Kentucky Bluegrass, Fine Fescues) can be installed year round in the entire United States.  They are more accustomed to cool weather and can tolerate being planted in the middle of winter.  If installed in the middle of winter in freezing temperatures, the sod might lay dormant on top of the soil and resume growing once weather warms in March.  This brief winter dormancy in cool season grasses is normal in the northern part of the country.

Warm season turfgrass (Zoysia, Bermudagrass, Centipede, St. Augustine) can be planted year round in the southern portion of the county, but should only be planted during the growing season in areas of the country that are subjected to long term freezing.  The reason for this is that extended periods of time below freezing can kill freshly established warm season grasses since they do not have a developed root system.  In Maryland, this means Zoyia and Bermuda should be installed between April and Late September

Winter is actually a great time to install sod!

Sod will last for up to two weeks when the weather is below 40 degrees!  This means you have more time to complete your project.

Less water! You usually only need to water sod once after installation if installed in winter.  The cooler temperatures and more frequent precipitation will keep the soil moist for the new grass.

It will stabilize the soil.  Sod does a better job at preventing runoff when compared to straw.

Should anything different be done when installing sod in winter?

There are only two differences when installing sod in cold winter weather:

Can sod be installed on frozen ground?

Yes, sod can be safely installed on frozen ground as long as the soil was prepared properly prior to freezing (rototilled and raked smooth).

Some other things to think about...

Keep these other points in mind when installing sod in winter: